We played tourist in LA during the weekend and visited Madame Tussauds in Hollywood. Madame Tussauds is a 3 storey wax museum and they have added a brand new, multi-million dollar Marvel Super Heroes 4D theater. With a hubby who is big on comics, it's a must go for us. 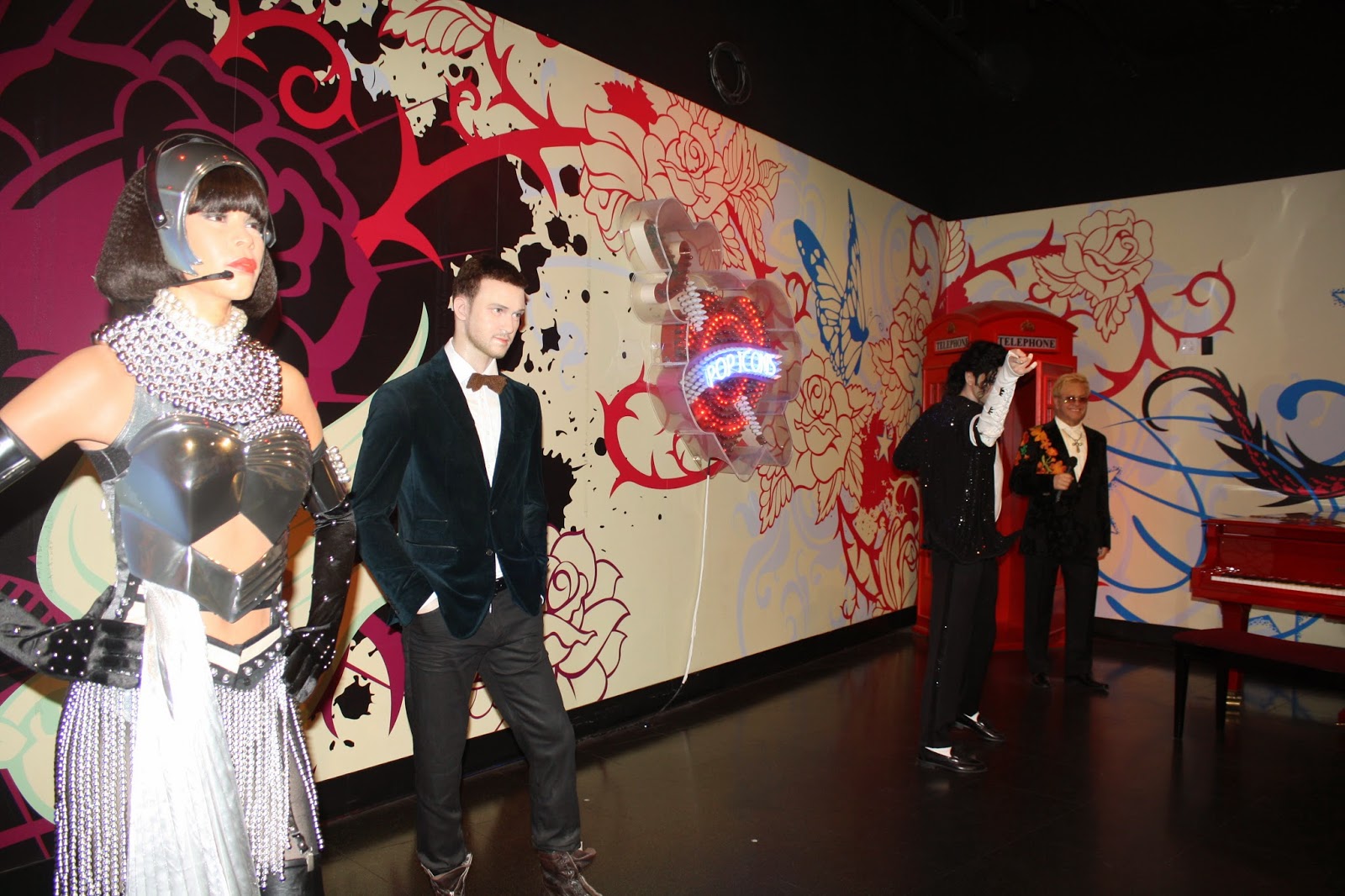 We started our tour of the wax museum on the third floor and worked our way down. We found about 90% of the wax figures at Madame Tussauds to be exactly like their celebrity counterpart of whom they were formed from. Like Snoop Dogg, Taylor Lautner, Nicole Kidman, Lady Gaga, Madonna and so much more. They have famous celebrities of the past to the present at this wax museum. 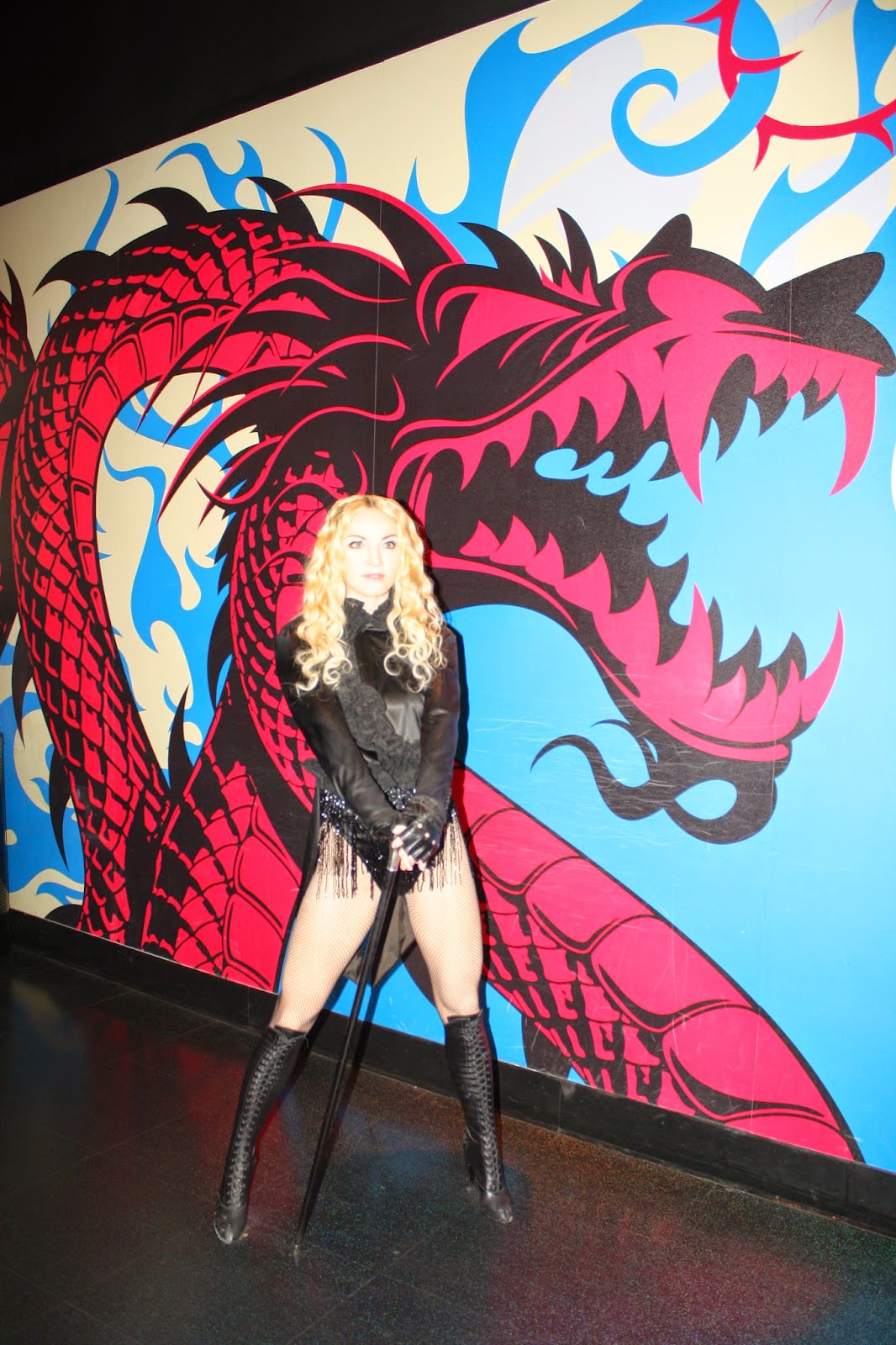 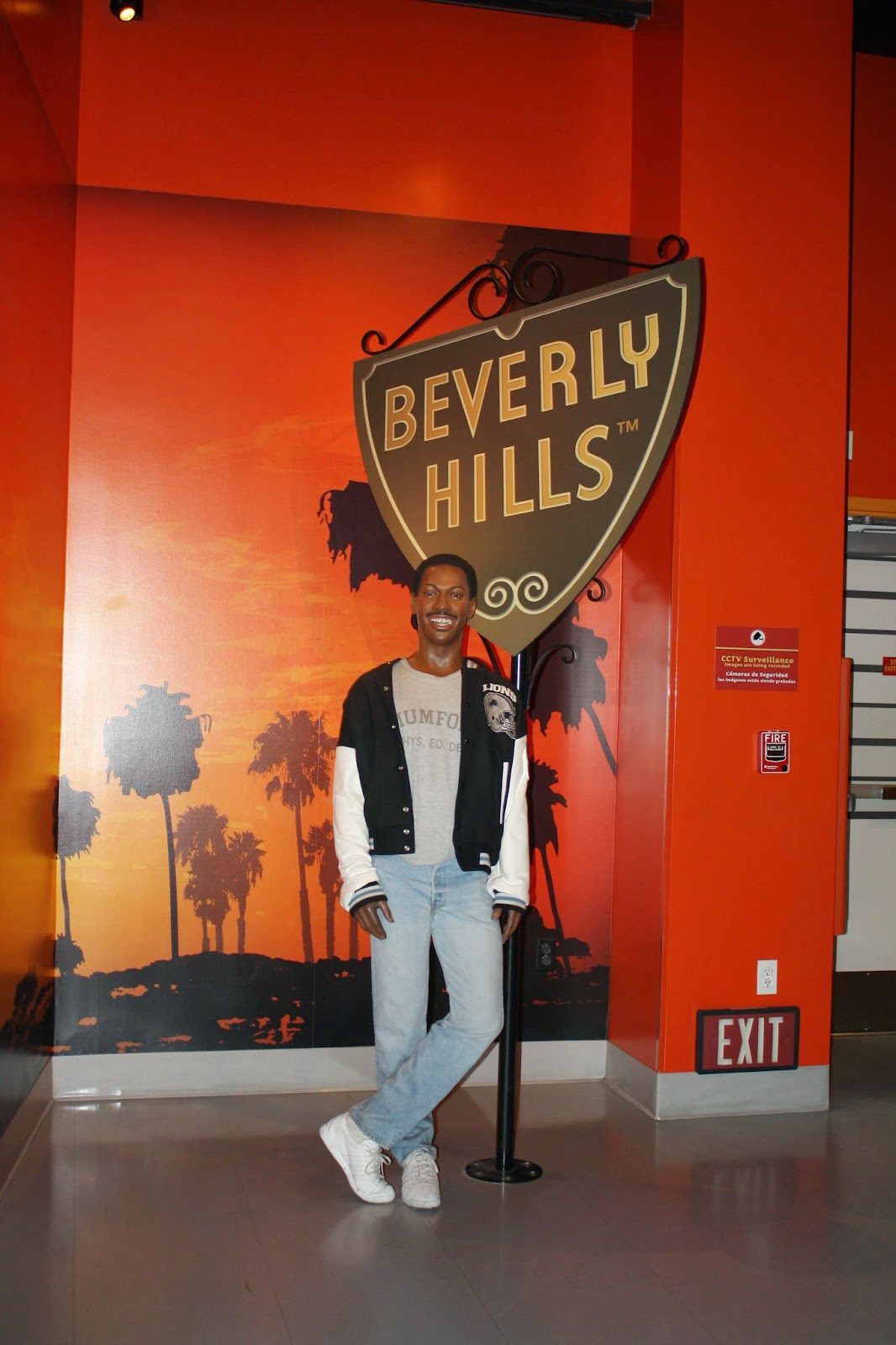 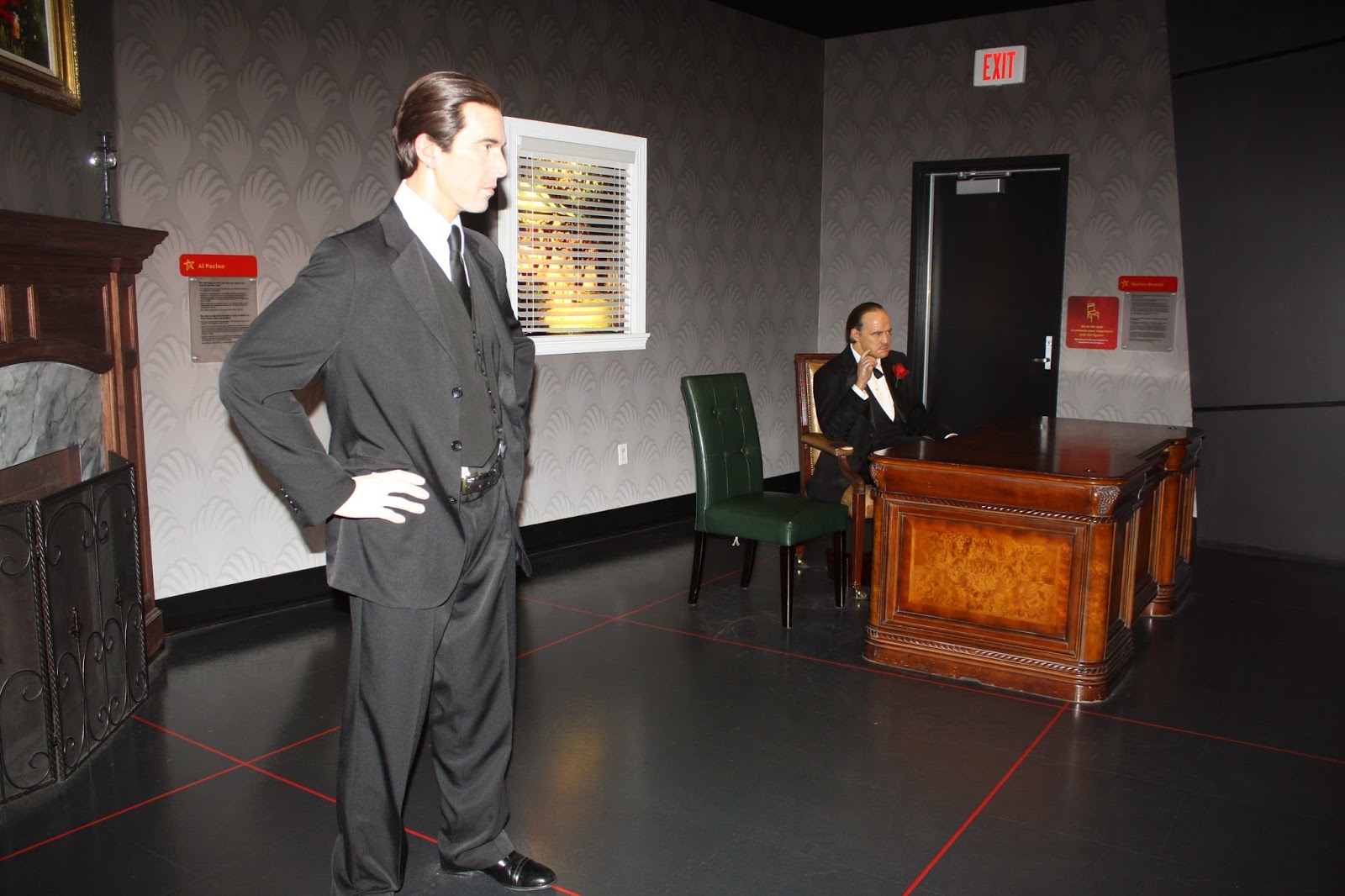 They also have fun set-ups including riding the bicycle with ET & posing with President Obama. And they have photographers at these areas so you can purchase them at the end as souvineer but they'll also let you use your own camera. 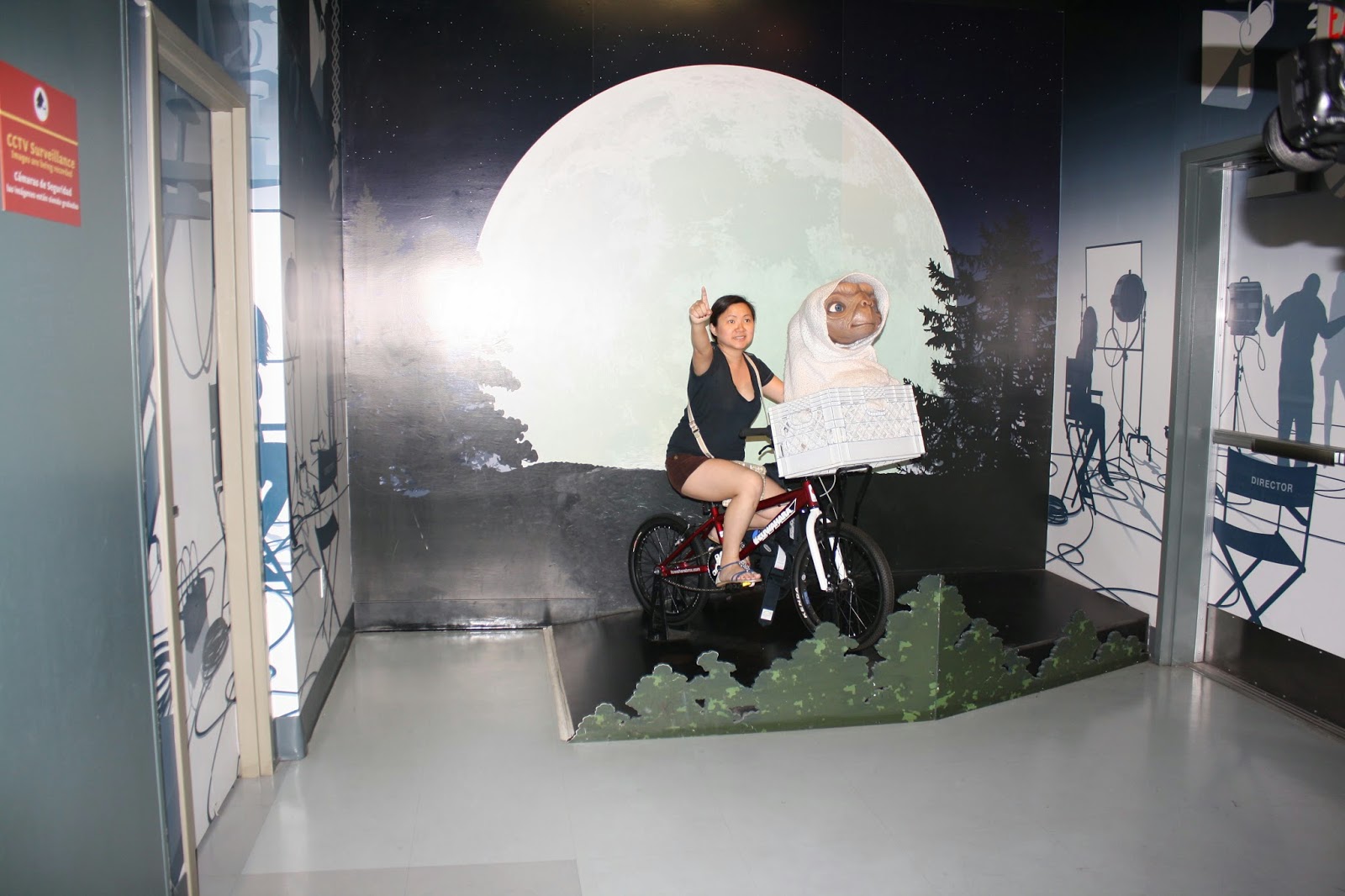 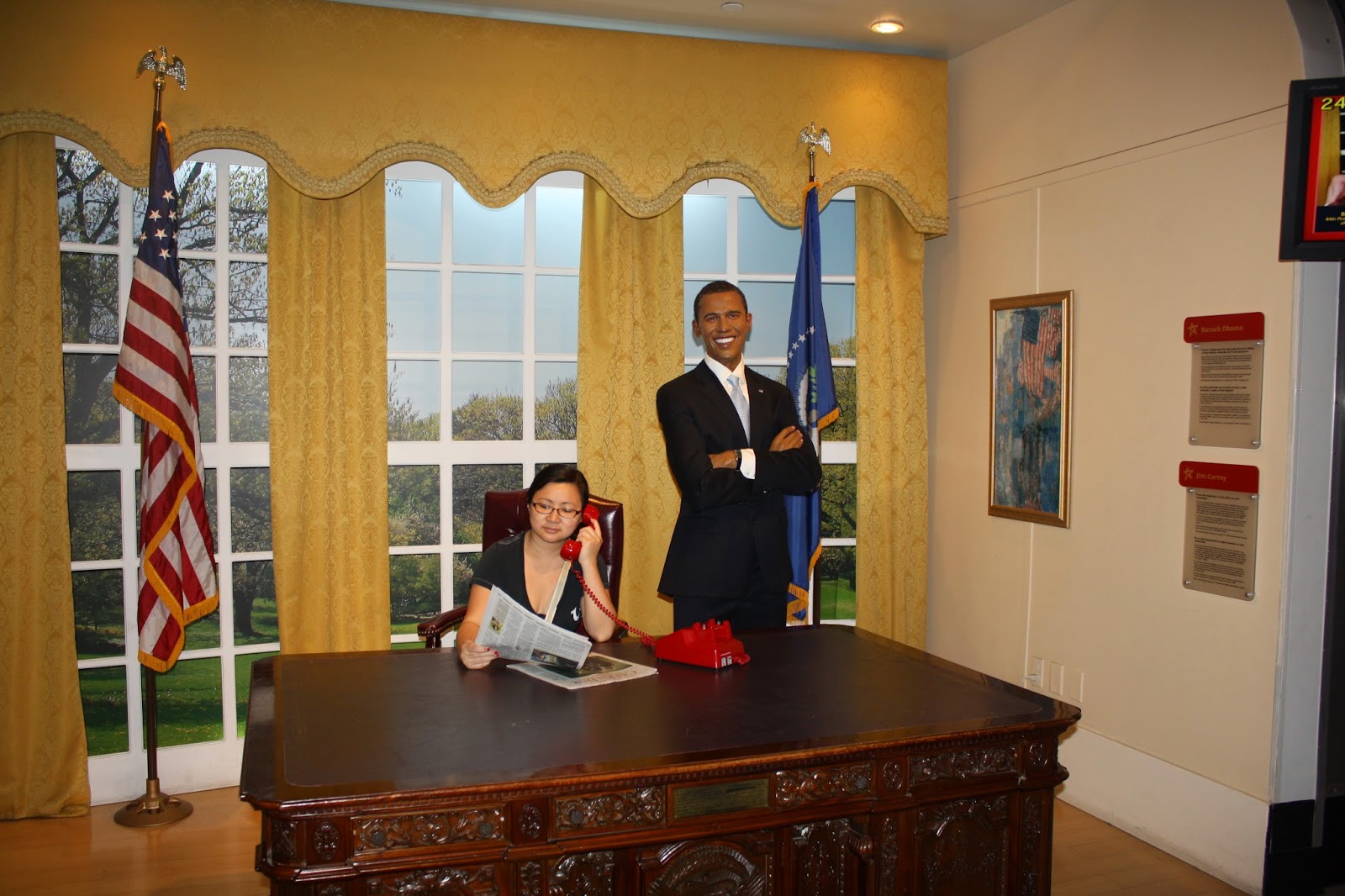 Another fun part is you can learn about the whole process of making wax figures as well as experiencing having a wax figure of yourself. I probably wouldn't wanna bring home an extra body part(haha) but to have the process done to myself would be interesting to experience. Like this gentleman in the picture below having his hand formed into a wax. 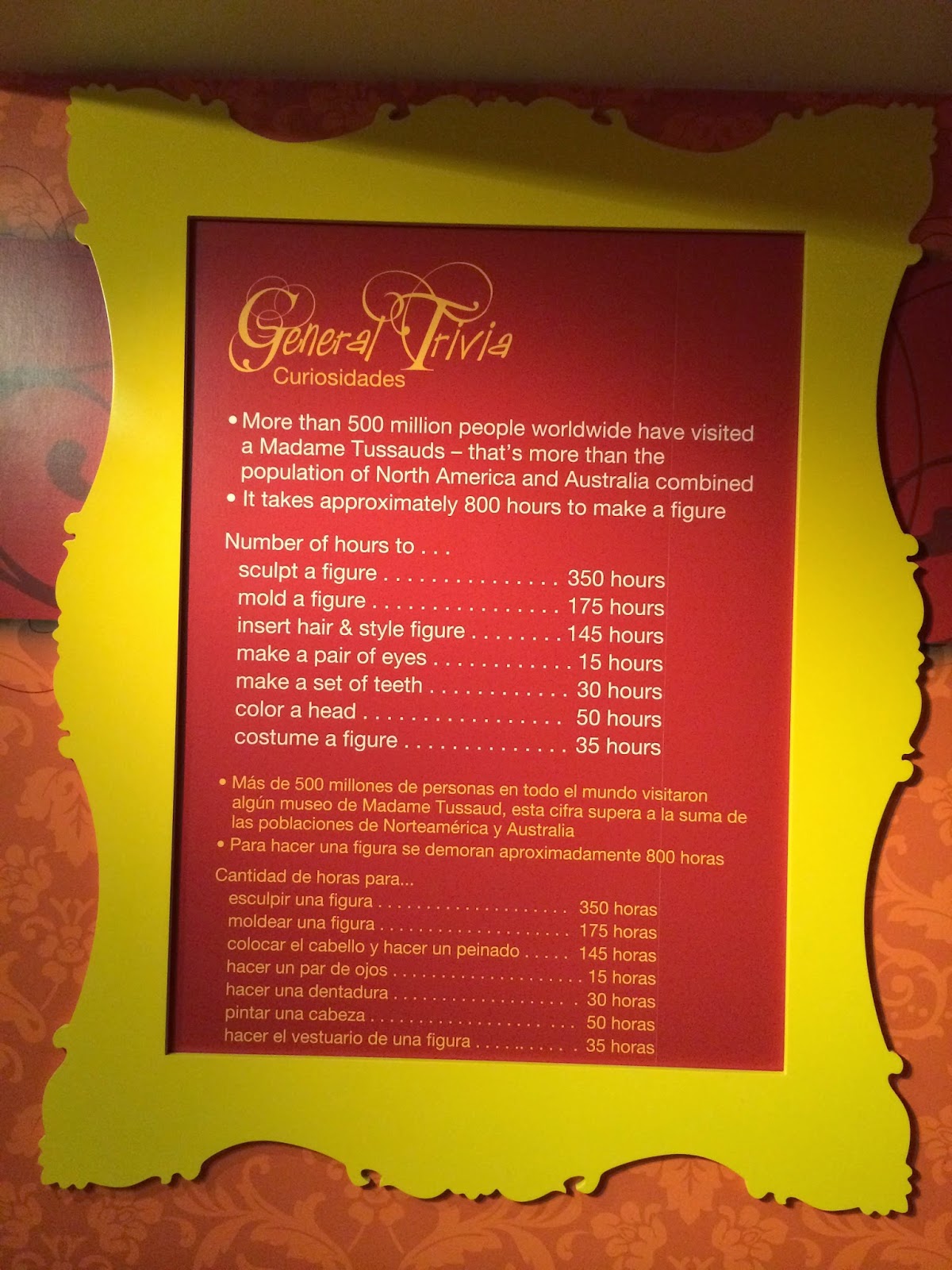 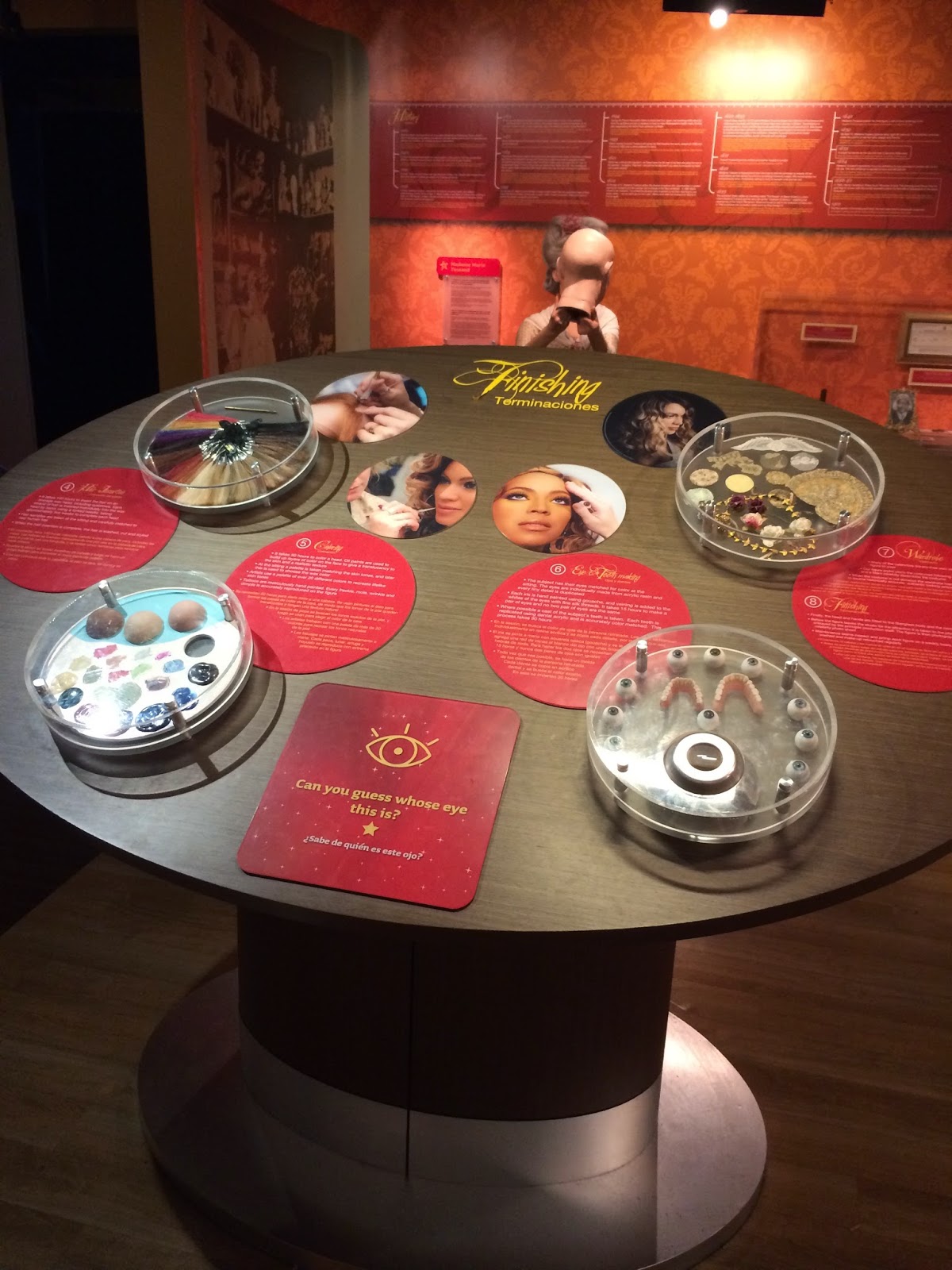 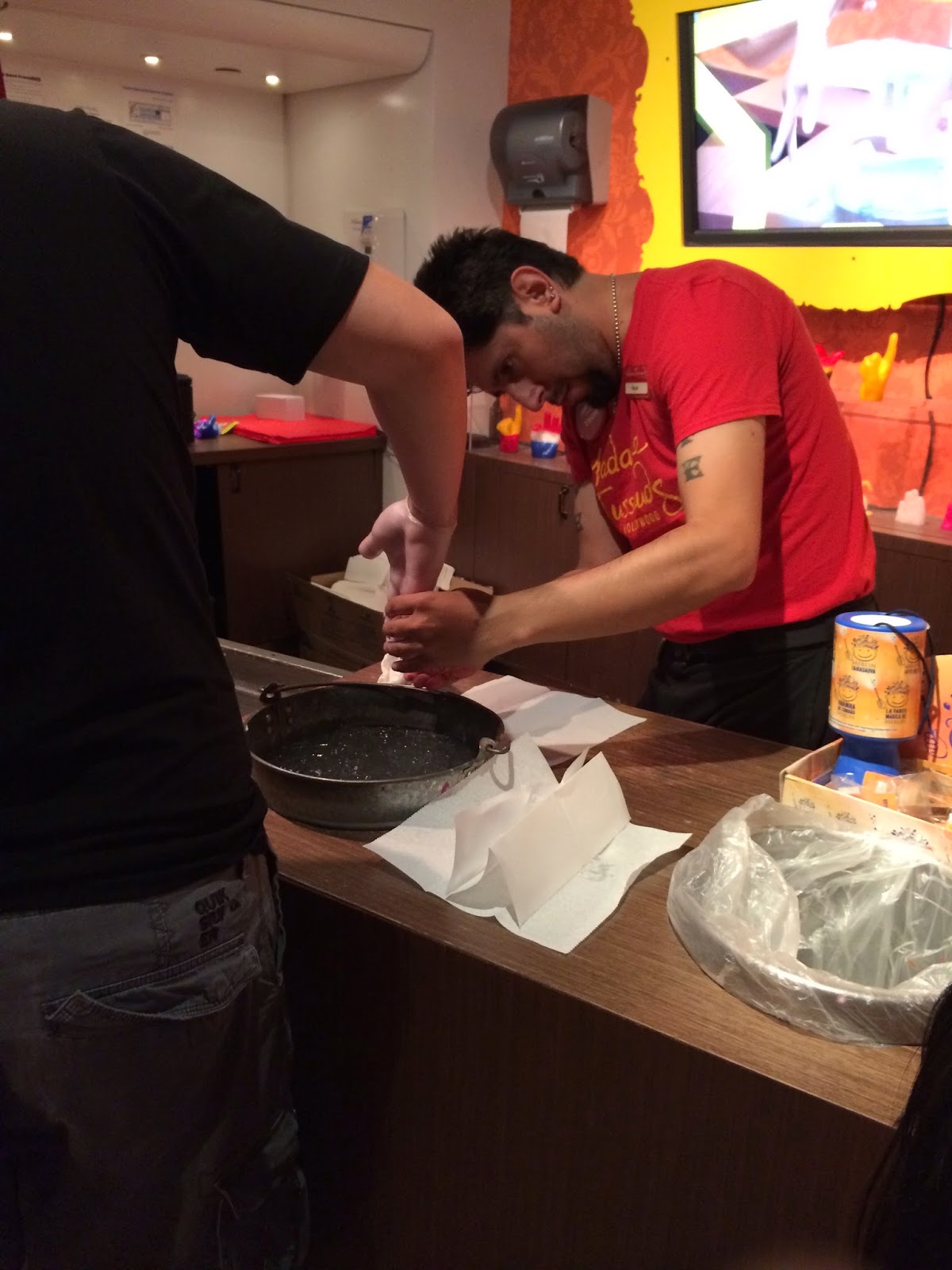 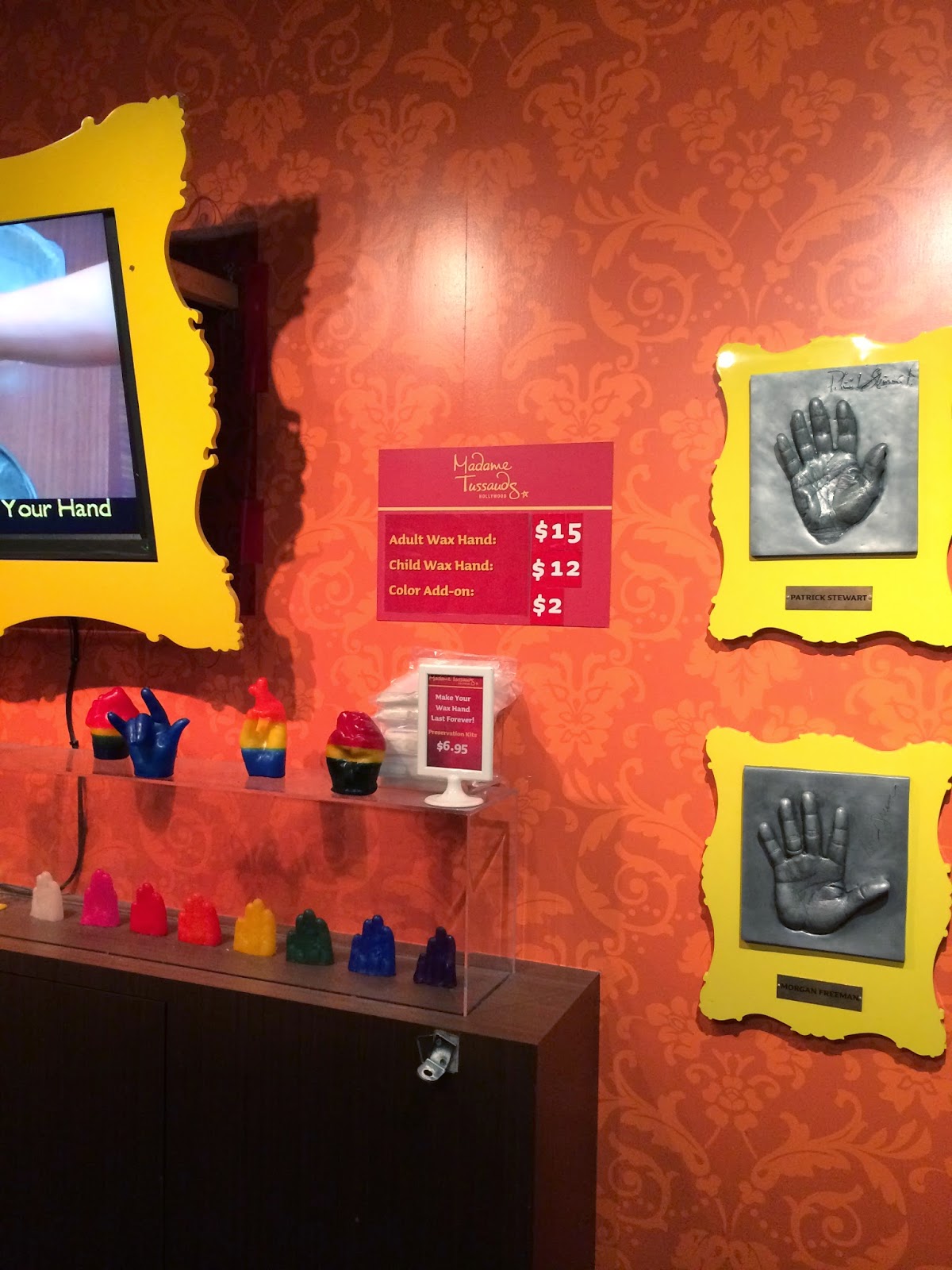 The final part of your Madame Tussaud self-guided tour is the Marvel exhibit where you can see Captain America, Iron Man, Thor & experience the Marvel 4D. What better way to satisfy your superhero appetite but by hanging out with your favorite Marvel characters and taking an adventure with them at their 4D show at Madame Tussauds Hollywood. 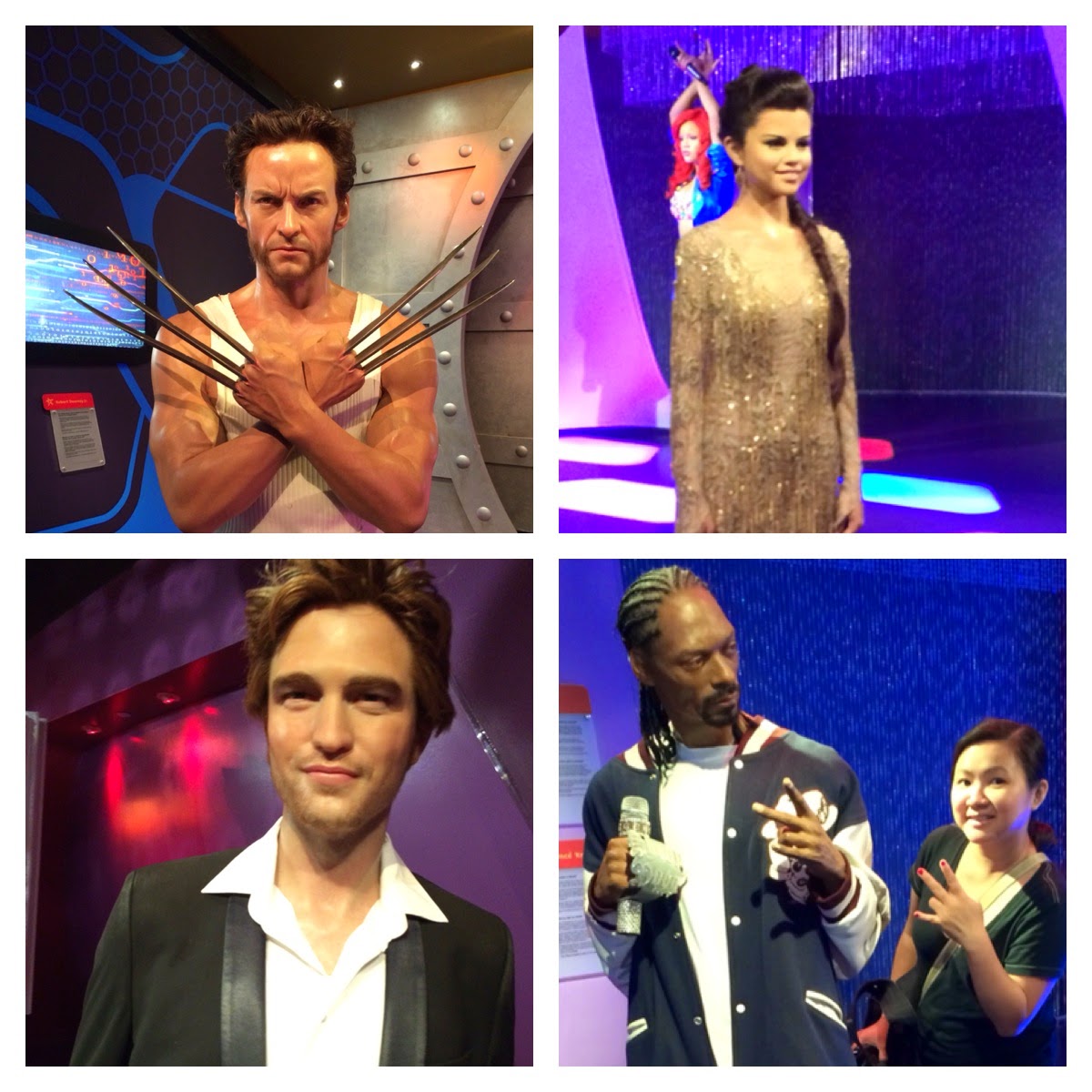 Comic book and movie fans of Marvel will finally see the Avengers, X-Men and Spiderman in one universe. From Iron Man’s glowing Arc Reactor to Hugh Jackman’s scowl and claws as Wolverine, the life-size action figures are remarkably real and remind of you of the toys of your youth or the ones you still keep displayed on your shelf at home. What’s amazing is not only are you standing next to Thor or Captain America for a photo op, but it’s Chris Hemsworth and Chris Evans in the suits. 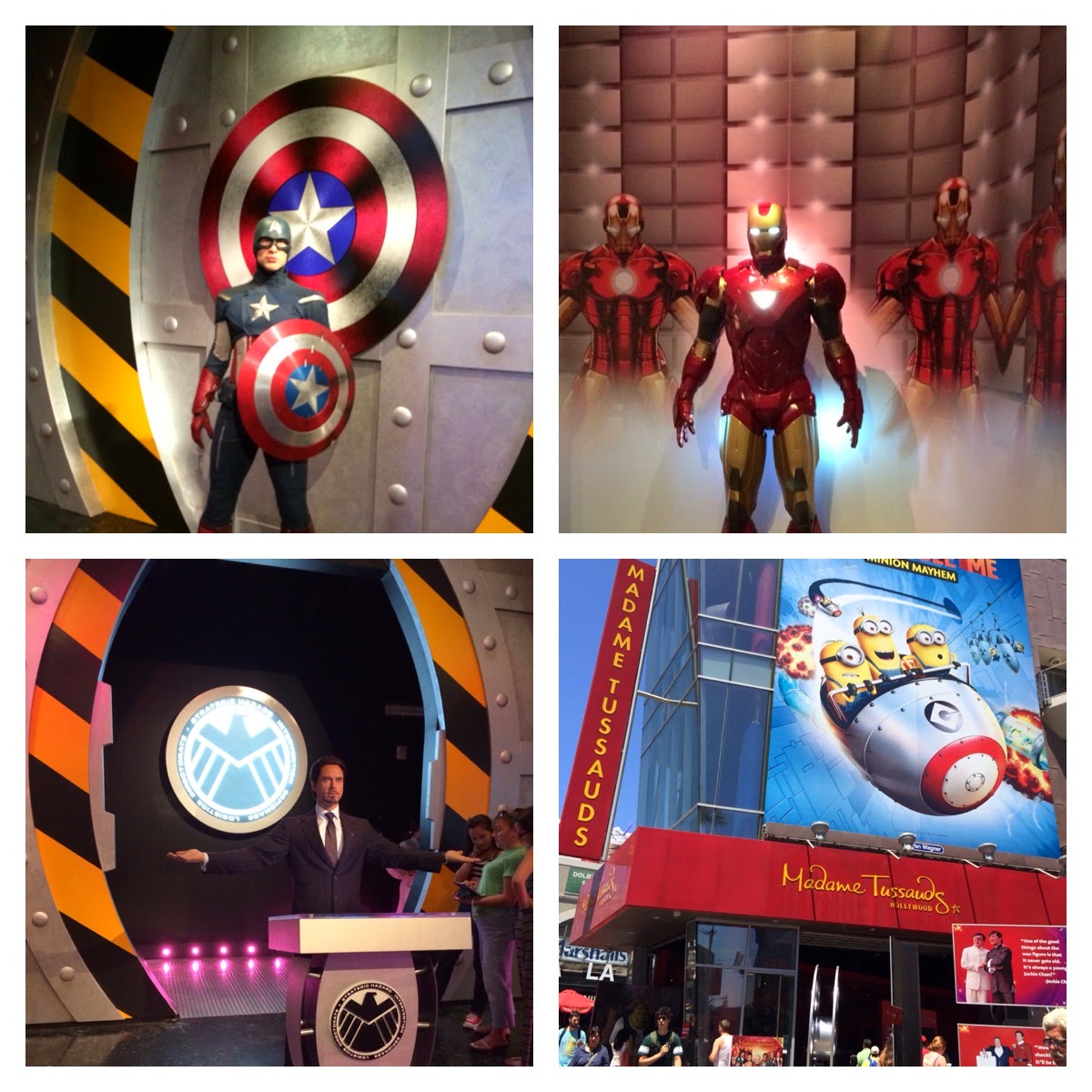 Once you’ve taken every crazy pose with your superhero, a life-size Robert Downey Jr. as Tony Stark welcomes you into the Marvel Super Heroes 4D experience. The animated adventure is action-packed with the humor and drama we’ve come to expect from Marvel movies on the silver screen. The 4D effects are especially surprising and are fun for the entire family. However, smaller children should be accompanied by an adult as the effects are very tactile and surround sounds are strong. For tourists, the show will be a nice break from the busy streets of Hollywood and a great way to escape the LA heat – the sprinkles of water from the 4D show are also not a bad way to cool and refresh. 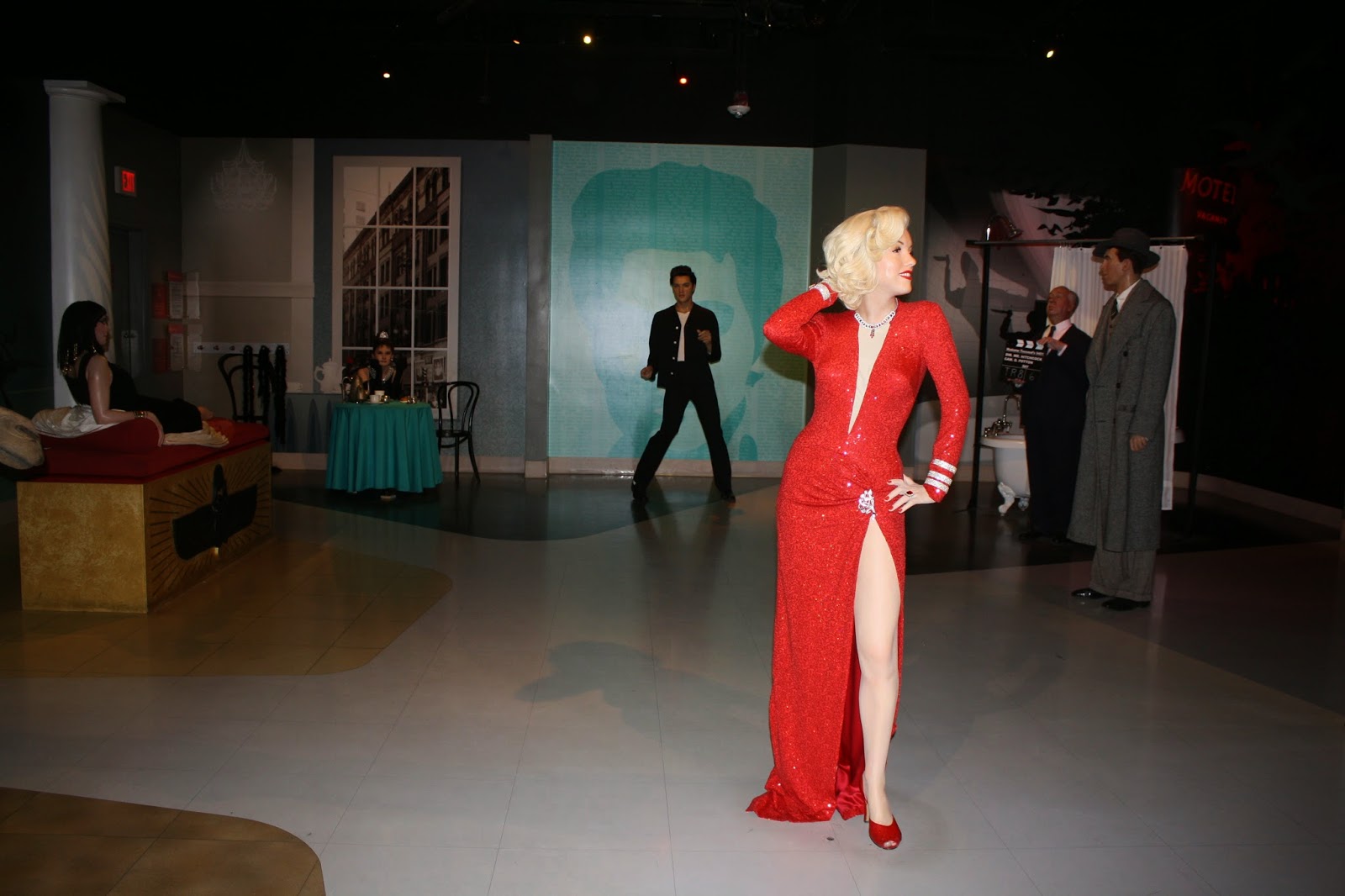 There's a lot of things you can do in Hollywood but we recommend adding Madame Tussauds on your list of places to visit. Bravo to Madame Tussauds for providing a great experience for not only the fans of the movies and music, but as well as comic book fans young and old. The Marvel Super Heroes 4D show and wax figures at Madame Tussauds Hollywood will bring out the kid in all of us! Plus kids get in free with an adult paid admission. You can print your coupon here. Have fun!!!

disclosure: we received free admission to the museum to facilitate this review. All pictures and opinions are my own. Experiences may vary.